My mother included me in her art and creativity. She encouraged me. As well as being a musician, my mother was also a graphic artist and a book designer. She introduced me to woodcut printmaking and had my woodcuts published in the Carolina Quarterly before I was five years old. She taught me intaglio printmaking and assisted me in producing a series of prints inspired by our trip to Old Salem.  She bought me a Polaroid camera and took me to Blalock's Farm (which she herself immortalized in her art) to take photos. She taught me to sew, and I sold my cloth dolls at the CFS Crafts fair. She made all the tools of her office available to me: colored book jacket quality paper, her rapidograph pens, books full of typefaces, her tracing table, and the Xerox machine. I once wrote a play about Florida orange pickers, made multiple scripts at her office, and was supported to produce the play with my friends in our living room at home.  When I was uninterested in reading, Mom hooked me up with one of her friends who worked for a New York publisher. This friend introduced me to Newberry Award Winning Children's' Books and reading became my favorite hobby.

My mother looked into the future, and planned a rich future for herself and for me. She worked very hard to achieve her future plans. I remember the hours she spent painting, drawing, practicing mandolin, and playing recorders with me on the front porch in the afternoons and evenings. I remember when she started taking me swimming on Wednesdays at Duke, as she tried to build back the trophy-winning speed and agility she'd had in high school and college. I remember how she studied a book about frame-building and made many of her own picture-frames. Not only did she succeed in having a one-woman-show at the Duke Art Museum, which she dedicated to me, she also earned the honor of being hired by The Princeton University Press as a book designer. We were in a car wreck on our way to our new life in New Jersey, and she was killed. 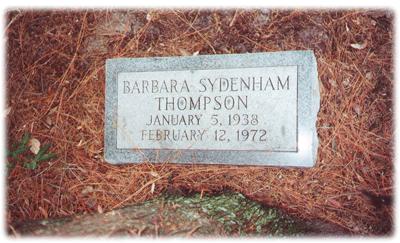 back to the top

Besides Tommy's section of the site, the following pages are also related to Jesse and Tommy:
Blurred Time "The Sleeper": the aftermath of Jesse and Bobbie's car accident
Mike Craver's "Visiting Tommy"
Roots of the Red Clay Ramblers:
Fuzzy Mountain String Band: Jesse's mom, Bobbie, recorded with Rambler Bill Hicks and others
Hollow Rock String Band: Tommy and Bobbie Thompson named this band for their community